In an earlier post, I mentioned Curse of Sunder, a homebrew version of Curse of Strahd that we've started playing and streaming once per week.

The Party
The players decided to create a party of from the Freelands, which means they are playing elves and goliaths.
Streaming
We're streaming the games on various channels for two hours every week.
Furthermore, I'll also be creating short 10 minute videos where I remove all techincal stuff, irrelevant talking, and dice rolling (which I'm making visual instead). The videos are made so that you can listen to them as podcasts.

Session 1-3
The first three sessions covered the introductory adventure called Death House. The homebrew version is that the party was hired by an elf called Tilar Durst to recover his two grandchildren from the ruined city of Zehnos. I will try to avoid spoilers too much, since you can watch the videos here.

In short, the party explores Death House as it is described in Curse of Sunder, except there's another religion behind it. I changed the names to elven names, and use the house as a shadow crossing into the Plane of Shadows, which is where most of the campaign takes place. I also changed Strahd into a female shadar'kai called Sunder who is not a vampire, but has another dark secret.

The party avoids the house turning against them through very creative roleplaying at the end of the dungeon. They sacrifice a living being without sacrifing any party members, and appease the cult, which means the house doesn't attack them and they get to leave peacefully. For more details about how they do it, check out the videos.
Indsendt af Unknown kl. 09.00 Ingen kommentarer:

I mentioned in an earlier blog about a 2 hour weekly session that I started running with children in my local community. We played 8 hours over the course of a month, and the project attracted a number of children. At one point there were 7 children at the age of 8-12, but usually there are 3 children who show up every single time.

Storm King's Thunder
The players created characters, and nearly every single player ended up creating a half-elf rogue. Fortunately, it is still possible to have a balanced game even without covering every single role. The party travelled to Nightstone to meet up with friends and family, only to find an abandoned city. The players started exploring the city, looting it, and killing goblins, until they reached the castle where they met the guards. They recruited the guards and returned to clearing out the town of goblins until the Seven Snakes arrived. Everyone made friends, but the Seven Snakes tried to trap the players and guards within the city. Meanwhile, the party started to assassinate Seven Snakes, who had spread out to secure the city. It all culminated into a fight, which was never resolved before we continued to the next adventure. 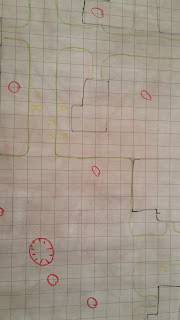 Lauritz' Campaign
The reason we stopped Storm King's Thunder is because one of the children wanted to try and be the DM. I had the pleasure of trying a real kid's game where the party had travelled to a city in search for food due to starvation at home. We found a tavern filled with food and a quest giver who was slain by the tavernkeeper whom we ended up fighting. The tavernkeeper used a device to close off the city so that we couldn't escape, but the quest giver had given us clues to how we could get free. This clue led us to a hidden prison with eight cells filled with monsters, traps, and loot. We have cleared the prison and reached the last chamber.

EkstraLiv not at Comic Con

I went through the basics of the charity event EkstraLiv in an earlier post where I also mentioned that we would be trying to hold the event at Comic Con in Copenhagen. Unfortunately, I was informed that Comic Con wouldn't be held in 2017, but has been moved to the beginning of May 2018. There have also been major changes on how we're preparing for the event.

Preparing for the Event
We started out with a project group of 4 who was trying to prepare the event for May in the hopes that we had the skill and ressources to be able to host two events in 2018. Unfortunately, one of the members gave up at the beginning of April, another member couldn't handle the deadlines and stress, which left 2 people with several months of work and 3 months delay. We will therefore stick to hosting only a single event per year.

This change in the project group also meant changes in how we're preparing the event.
We're still looking for more DMs. If you're interested, then sign up on the Youth's Red Cross' site.

Convention
Since we're not bringing this charity event to Comic Con, I decided to investigate other potential conventions and found a tabletop roleplaying convention in Copenhagen called Viking-Con. It is a convention at the middle of October and they seemed very interesting in having us. I've given them our entire pitch and am now waiting for feedback from them.

Even though some of us will be hosting our games at Viking-Con, then it is still possible to host a personal game elsewhere, or even over the internet. Furthermore, it's also possible to host games prior to the event and gather money for the event.

Any questions should be sent to Jay_jayjay@yahoo.com
Indsendt af Unknown kl. 00.31 Ingen kommentarer:

Join us on an adventure. Experience Defiance in Phlan. Win giveaways from Dragon's Lair. Learn to play rolegames. 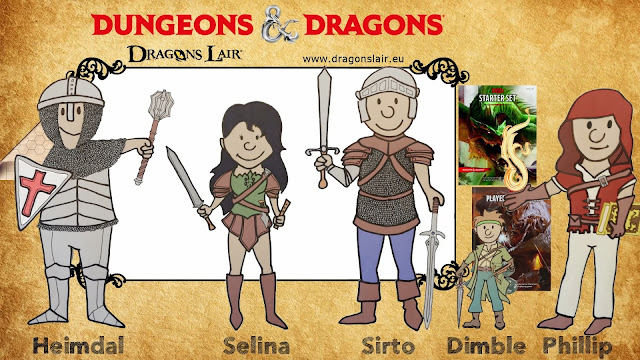 Those are the words for the trailer for the new danish D&Danmark youtube series. I was asked to help set it and be the DM for the game. In January, we recorded and the series officially started on saturday 25th February 2017.

I decided to run Defiance in Phlan because it's a good introductory adventure that many viewers may be able to relate to. We divided the five missions so that each player could upload a number of episodes to their youtube channels. Each mission was then divided up into 15-20 min segments to create episodes that would run until June 2017.

I've been running a yearly D&D 5e charity event since 2014. Since November 2016 I've been working on the EkstraLiv 2017 charity event. This time I've assembled a team of four to enlarge the event. Together, we've been able to make deals with the Red Cross, focusing on international children projects. We've also made a deal with Fanatic, a shop in Roskilde. 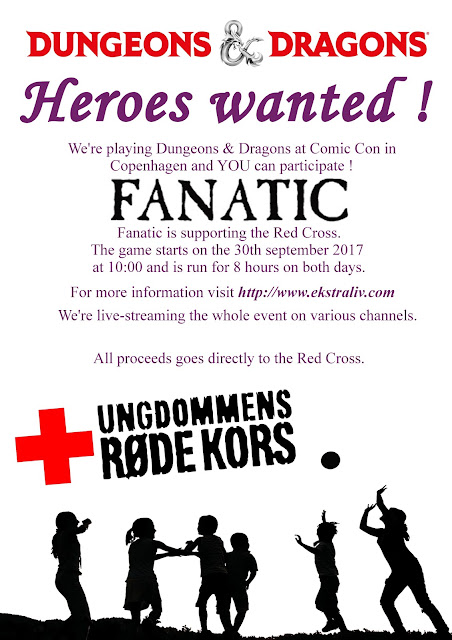 The project is far from done, and we're hoping to get approval to bring this project to Comic Con 2017 in Copenhagen. We'd then run eights hours on both days, and anyone with a ticket will be able to join the game for 4 hour segments by donating to the Red Cross. The game will then be run a little bit like Hunger Games, where people can donate to help their favourite players. We're aiming at getting some famous danish people to join us, everything from youtuberes, to Paradise Hotel contestants and maybe even Sidney Lee. We're also aiming at including Giveaways.

There's still a lot to do on this project, and our next large workshop will be on the 1st April. Until then, check out the draft of a potential poster for the event above, though it will definitely be modified and improved before it's officially launched.

The two campaigns I play

After having read "Stemmen fra Ådalen", "Sort Forsyning", and "Skizofrenia", I was inspired to write this article. Note that GamemastersDK is an english blog written by Danish tabletop roleplayers.

My two games
Both of my games are D&D 5e, and they are games that are starting next week from tuesday 7th March 2017. Both are set in my homebrew world of Aresia and focusing on expanding the tabletop roleplaying knowledge in Denmark.

D&Dalmose
At Fastelavn 2017 in Dalmose, I was approached by a family that had noticed some of my previous D&D work, and they asked me to set up some tabletop roleplaying games for the children in the local community. I've therefore set up a 2 hour session every tuesday that any children between 9 and 12 that can speak either danish, english, or french, can attend at Atkærcenteret in Dalmose.

The game will be based on the Storm King's Thunder D&D 5e adventure and modified to fit into my homebrew setting where the Tyranny of Elves reigns. The dragon leader Langdedrosa of the halfling jungle of Harken is manipulating the giants serving the elves in the hopes to split the government of the Tyranny of Elves in order to weaken it so she can invade Cimmeria. The first games will focus around the city of Nightstone where the players will clear it of goblins and rescue its inhabitants after it was attacked by giants. 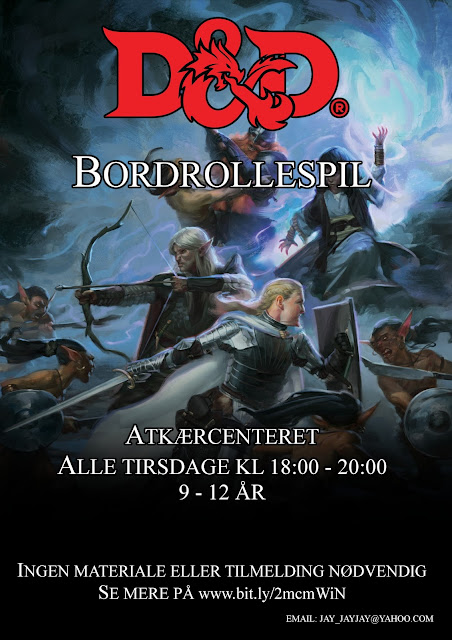 Curse of Sunder
I've assembled a group to plan a large D&D 5e event to take place at Comic Con in Copenhage 2017. We are largely advertising for this event, and as part of this, I've decided to host a 2 hour streaming session of a D&D 5e game with famous danish people once per week. The exact players will be announced next week.

The game itself will be the Curse of Strahd adventure modified to my own homebrew world. The players will find themselves in the Shadowfell, more specifically in the land of Daedaloth, which is being taken over by the powerful being known as Sunder. The players will travel from the ruined capital of Al'Rual where Sunder resides, and into the heart of Daedaloth, to the current capital of Hallalia and other cities. This will be a great example of how to modify a prewritten adventure to a homebrew setting.
Indsendt af Unknown kl. 13.04 Ingen kommentarer:

A year ago I started this blog. It was my attempt to keep up to date with new trends and technologies. Although Pink Pulse wasn't as large a part of the blog and youtube channel as I hoped, she still contributed. I also dropped the vlogs early in the process since it wasn't something that appealed to me although I did get an insight into it and learned a few things from creating them. In conclusion, I learned a lot about this whole project, but I don't feel that it's something for me, so this is the end of this blog.

What have I learned
I've learned a few things. If I were ever to use blogs more professionally, I would strive to write shorter articles. I also learned to add pictures, and then there's networking and advertising, which is the main thing to do if used in a professional manner. I learned that all of this is not something especially for me, but that I could do it and greatly improve if there was a proper incentive.

Favorite articles
The article I've gone back to the most, and shown/talked to people about most often, is my article about competitive D&D. We're hoping to set something up next year in Denmark, so we'll see how it goes.

Worst articles
The worst article I wrote I think is my first project update (along with every other project update). These articles were mostly filler, had too much text, and no pictures. I would strive to stay clear of such articles in the future if I were to write another blog.


That's it for this time. Thank you for following and hope you enjoyed some of the articles.
Indsendt af Unknown kl. 03.00 Ingen kommentarer: